Man charged in 1994 murders of Texas couple, their 3-year-old son

EL PASO, Texas — More than 28 years after a Texas couple and their toddler son were found stabbed to death in their own home, the man accused of killing them is in El Paso police custody.

Arturo Ortega Garcia, 69, was arrested Friday on a charge of capital murder of multiple persons in the deaths of Francisco Santoni, 59, Maria Concepcion “Connie” Villa, 28, and 3-year-old Dante Santoni.

Villa’s sister discovered the slain family’s bodies Aug. 11, 1994, during a welfare check, according to the El Paso Herald-Post. Authorities said the woman became concerned after Villa, a successful travel agent, failed to show up for work.

Francisco Santoni and Villa were found dead on the floor of their bedroom, the newspaper reported. Santoni was fully dressed, but Villa was wearing nightclothes.

Dante, who had celebrated his birthday days before the murders, was found face down on his bed in a separate bedroom. 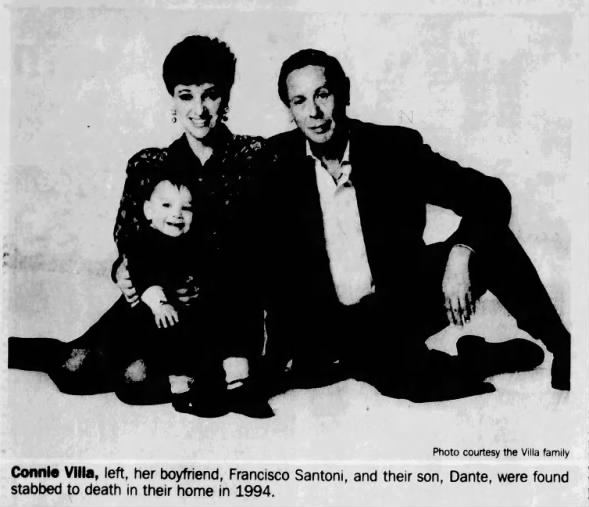 Mother, father and son had each been stabbed more than 10 times, authorities said.

Villa’s green Dodge Colt, which was taken along with some clothing and jewelry, was found four days later about 22 miles from the family’s home. The car had been abandoned a few thousand feet from the border between El Paso and the city of Juárez, Mexico.

“During the (initial) investigation, police recovered evidence that did not develop workable leads at the time, and the case went cold,” El Paso police officials said in a statement. 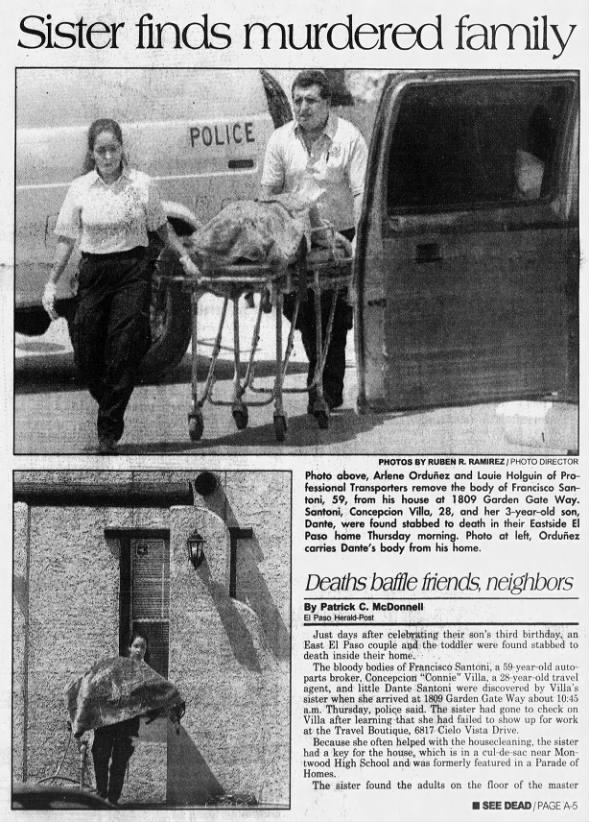 In September 1994, the month after the slayings, police officials told the El Paso Times that they believed Villa was likely killed first, then her young son was slain as he slept. They theorized that Santoni then came home and surprised the intruder.

A neighbor told detectives he spotted Santoni outside the house, located on a quiet cul-de-sac behind Montwood High School, shortly after midnight on the morning the bodies were found.

It was the last time Santoni, who owned an international auto parts business, was seen alive.

Detectives soon found themselves at an impasse. Months went by, then years, and police were no closer to solving the case.

“With most other cases, we usually develop good leads,” El Paso police Sgt. Pete Ocegueda told the Times in 2009, 15 years after the murders. “But with this one, we were totally in the dark. There’s no one motive that stands out, or a suspect, for that matter.”

Cold case Det. David Samaniego said in 2009 that the best hope investigators had was that advances in DNA testing and other forensics would lead them to a suspect. 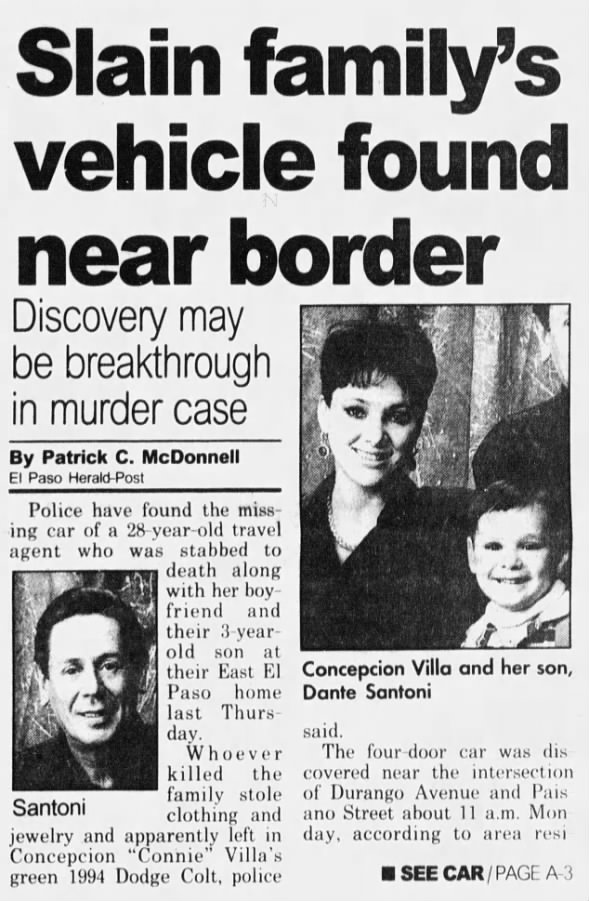 It would take another six years for that to happen.

“In 2015, with technological advancements, the case was reopened when Garcia was identified, and a warrant for his arrest was filed when his whereabouts were unknown,” El Paso police officials said.

In 2020, authorities learned that Garcia had been jailed in Mexico City, though the reason for his imprisonment was not made public when U.S. marshals had him extradited to Texas last week.

Authorities have not said what evidence led them to Garcia or how he might have been connected to Santoni or Villa. The motive for the murders is also unclear, the Times reported.

Garcia was booked into the El Paso County Jail, where he remained Thursday in lieu of a $5 million bond.