Man already serving life for murder found guilty in the death of missing woman In 2007, Michael Shane Townson fatally bludgeoned a childhood friend so badly that her face was unrecognizable.

DAYTONA BEACH, Fla. — A Florida man serving life in prison for beating a woman to death in 2007 has now been charged with the murder of a Daytona Beach woman who vanished in the fall of 1991.

Michael Shane Townson, 53, has been charged with first-degree murder in the disappearance of Linda Lois Little. According to Daytona Beach police officials, Little, 43, was last seen alive on Oct. 11, 1991.

Her body has never been found.

Police and prosecutors did not offer details of how Townson was identified as a suspect in Little’s disappearance and presumed death. Authorities said Monday’s indictment was the result of collaboration between police investigators and the state attorney’s office for Florida’s 7th Judicial Circuit.

“If not for the hard work and dedication from the Daytona Beach Police Department’s Criminal Investigation Department, it would have not been possible in developing a suspect in this case,” police officials said in a news release.

“It is extremely gratifying to solve a 31-year-old murder,” Larizza said in a statement. “I hope it brings some measure of peace to the victim’s family.” 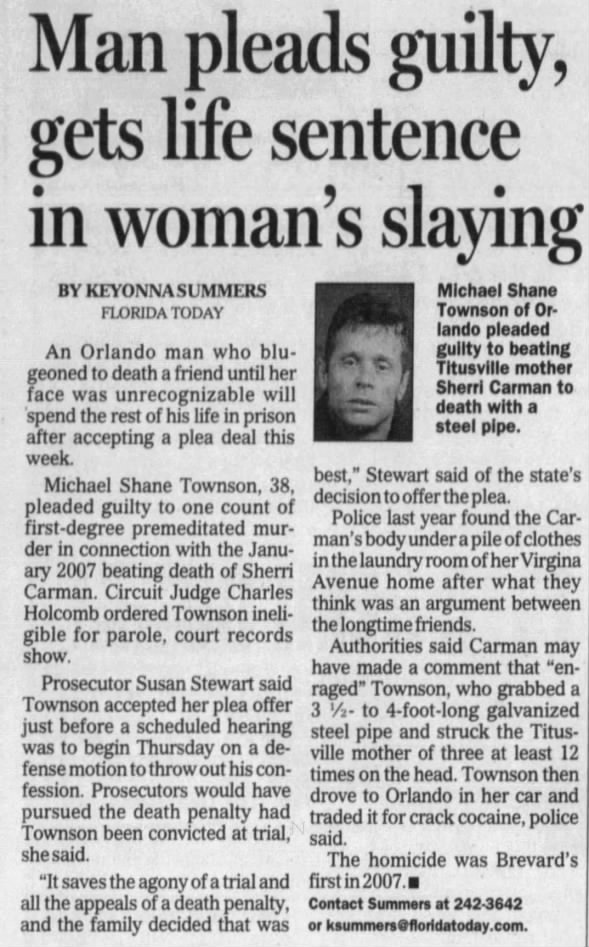 Little, a North Carolina native who had relocated to Florida, disappeared just weeks before her 44th birthday as she rode her bicycle home from her job at the Chart House restaurant on South Beach Street. She left work around 1 a.m. on her blue- and rust-colored Murray beach cruiser.

Witnesses reported seeing her early Oct. 11 at Matey’s Brig, a bar located on Broadway, which is now known as International Speedway Boulevard. According to the Charley Project, Little told friends she planned to go on a trip with her boyfriend that weekend.

“Investigators subsequently learned that Little and her boyfriend were not, in fact, going on a weekend trip,” the missing persons website states. “They had planned the vacation for their first anniversary, but the boyfriend canceled on the afternoon of her disappearance because he had decided to go fishing instead.

“It’s unclear why Little told her friends the trip was still on.”

Authorities later learned that Little’s boyfriend was married, the Daytona Beach News-Journal reported. He was questioned in Little’s disappearance, but detectives found no evidence of his involvement.

Little left the bar around closing time and was last seen sometime after 2 a.m. at a 7-11 convenience store, where she bought a donut and chocolate milk, the Charley Project website states. She never made it home.

Co-workers reported her missing a few days later after she failed to show up for multiple shifts.

Though there were no signs of foul play, police and Little’s family considered her disappearance suspicious. The News-Journal reported that her family printed and distributed more than 3,500 flyers, and Lamar Advertising put up billboards in an effort to find the missing woman.

The case grew cold over the years, though one possible suspect was identified as time passed: Oba Chandler.

Each victim’s hands had been bound and a concrete block tied around her neck before each was thrown from a boat, authorities said. Water in their lungs proved Rogers and her daughters were alive when they were tossed overboard. 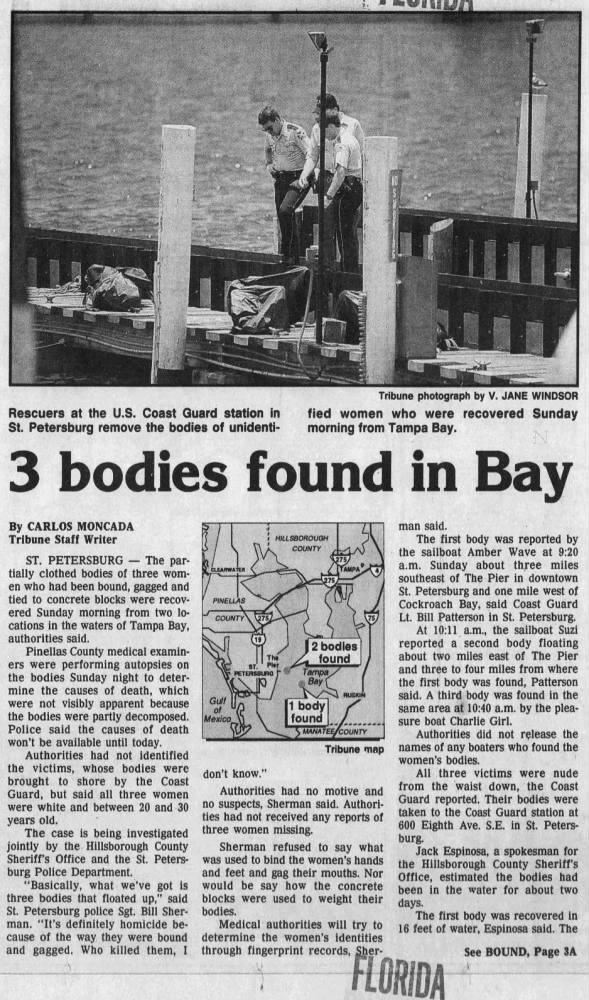 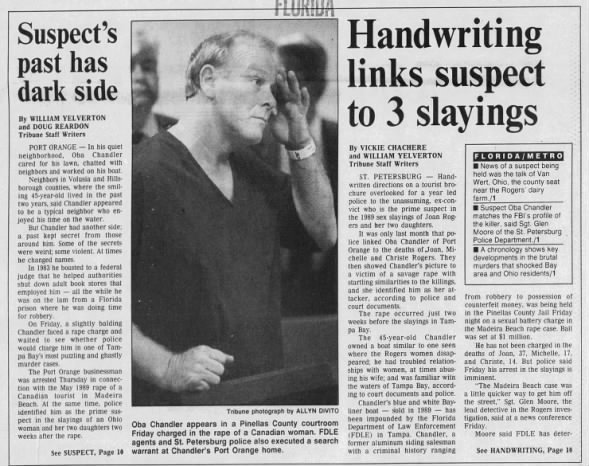 Through his prison stint and execution, Chandler denied killing anyone. In 2014, however, DNA evidence identified the executed inmate as the killer of Ivelisse Berrios-Beguerisse. The 20-year-old newlywed was raped and strangled Nov. 27, 1990, in Coral Springs.

Townson, who was 22 when Little was slain in 1991, has spent a significant portion of his life behind bars. Florida Department of Corrections records indicate that he was convicted in 1994 of robbery, grand theft and a string of burglary charges, all of which earned him a sentence of 17 years in prison.

He was paroled in late 2006, just four months before he murdered Sherri Lynn Carman, 29, of Titusville.

Court documents state that Townson and Carman were childhood friends who got reacquainted when Townson was released from prison. Carman allowed Townson to stay with her family for a while. 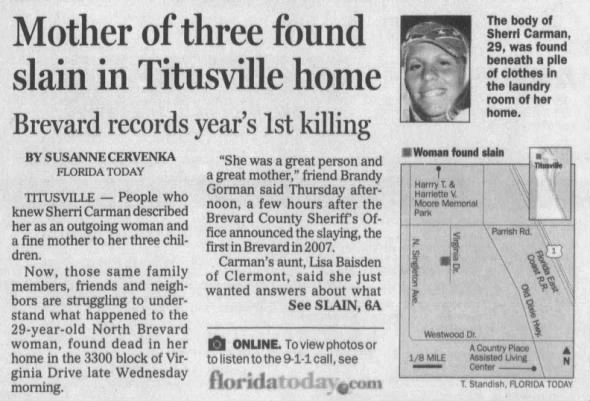 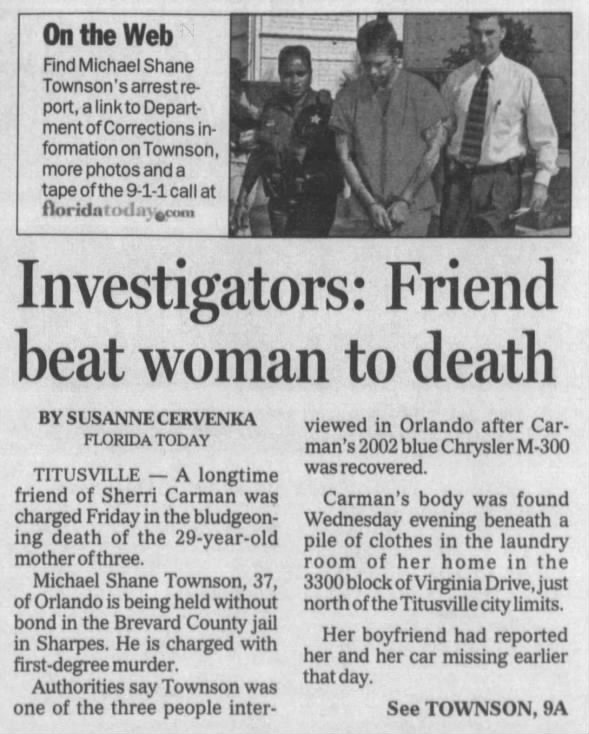 Days into his stay, Carman’s boyfriend and police found her body under a pile of clothing in her laundry room. Townson admitted to beating her to death with a metal fence post and a hammer.

The medical examiner found that Carman had suffered at least 12 blows to the head.

Townson fled in Carman’s car, which he drove to Orlando. He traded the car to a group of people for drug money, according to authorities.

The admitted killer told police he “snapped” after having sex with Carman and learning she might have given him AIDS, court records show. An autopsy showed she did not have the disease.

Carman was survived by her three young children.