Mutilated woman found on beach in 1974 ID’d through genetic genealogy A 13-year-old girl walking her dog found the body of a woman, missing her hands, on July 26, 1974. (NCD)

SEATTLE — Massachusetts police who have solved one of their longest-held mysteries — the identity of a murder victim known only as the “Lady of the Dunes” — are now asking for information about the suspected killer she married months before her grisly death.

Guy Rockwell Muldavin became the subject of a nationwide manhunt in 1960, 14 years before he married Ruth Marie Terry. Muldavin, who went by the alias Raoul Guy Rockwell, was wanted for questioning in the disappearance of his second wife and her teen daughter.

Manzanita Rockwell, 40, and Dolores Ann Mearns, 18, were last seen alive in April 1959. Human remains were found in a septic tank at the Rockwells’ Seattle home the following year, but Muldavin was never charged in their deaths.

Muldavin, who died in California in 2002, is now a suspect in the murder and mutilation of Terry, whose nude body was found July 26, 1974, on Race Point Beach in Provincetown. Her skull had been crushed, and her hands had been removed in an apparent effort to hide her identity.

The Tennessee native, who was 37 when she was slain, remained unknown for more than 48 years until DNA and genetic genealogy led authorities to her identity.

The FBI and the Massachusetts State Police announced last week that Terry had been positively identified. Within days, they had identified Muldavin as a person of interest in her murder.

Who was Guy Muldavin?

Muldavin, described by acquaintances as a “charming rascal with the gift of gab,” married at least five times.

Born in Sante Fe, New Mexico, in October 1923, Muldavin grew up on his family’s cattle ranch and was educated in Connecticut, New York and Switzerland, according to the Madera Tribune. He was in his early 20s in 1946 when, as Guy Rockwell, he married Jo Ellen Loop.

The couple, who opened an antique shop in Seattle, divorced 10 years later, the Tribune reported.

The Evansville Press in Evansville, Indiana, detailed the split in a 1962 feature on Muldavin, who by that time had made national headlines. According to the newspaper, Muldavin’s first marriage ended shortly after Manzanita Mearns and her then-husband, William Mearns, walked into Muldavin’s antique shop.

“Rocky and Manzie hit it off immediately,” the Press article stated.

In a matter of months, Muldavin kicked his first wife out of their home and shop, which shared a dilapidated house on Fairview Avenue along Seattle’s Lake Union waterfront. The breakup came out of the blue for Jo Ellen — and in front of customers.

“It was the cruelest thing I ever saw,” a witness later told police. 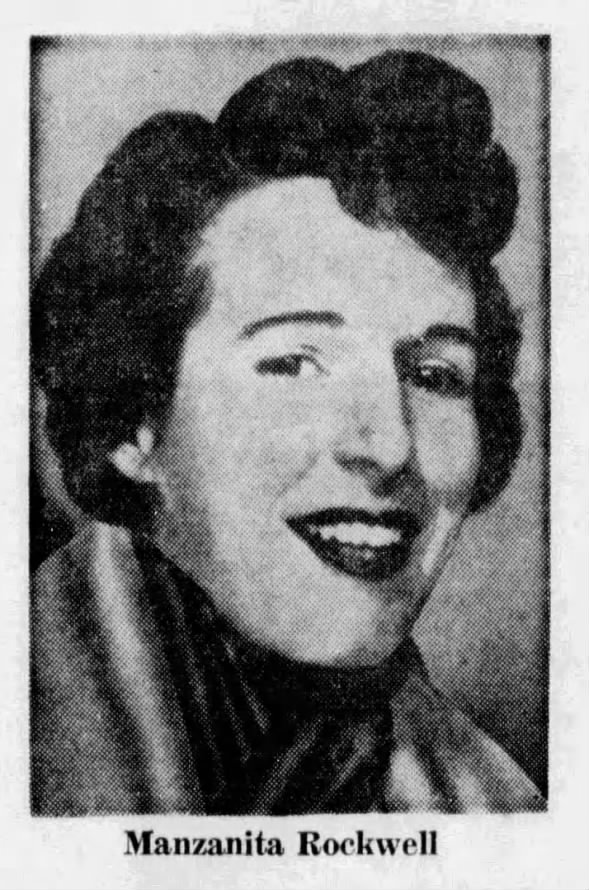 Jo Ellen Rockwell got a divorce and custody of the couple’s 9-year-old daughter. The Mearnses also divorced, and William Mearns retained custody of his and Manzie’s two younger children, then 10 and 6 years old, in Vancouver, British Columbia.

The teenage Dolores Mearns followed her mother to Seattle and moved into the Rockwell home. Once a month, Dolores and her mother, now known as Manzie Rockwell, would travel to Vancouver to visit her younger siblings and father. 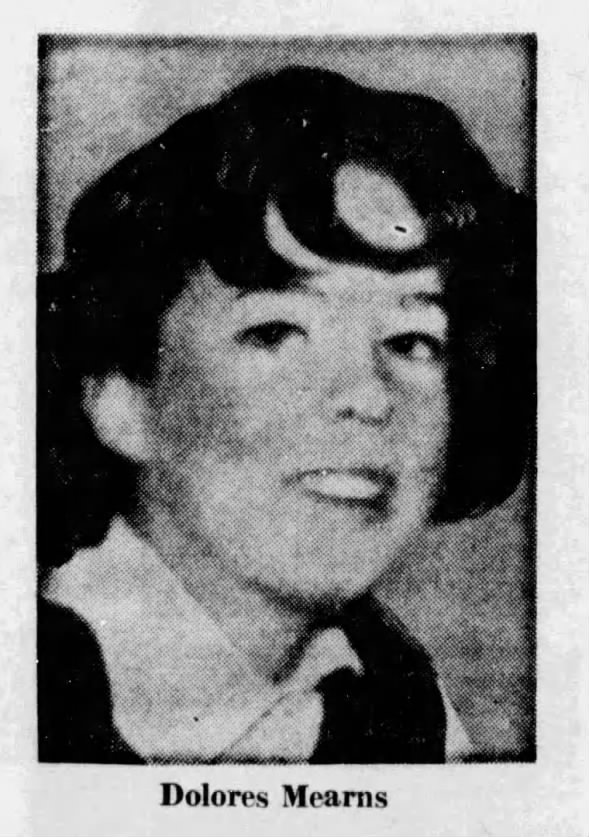 In early 1959, history repeated itself, according to the Press.

A couple by the name of Clifford and Germaine Winkler walked in with Germaine’s stepdaughter, Evelyn Emerson — and Muldavin was instantly smitten with Emerson.

Manzie Rockwell, who was described as normally “calm and self-contained,” became distraught and sought the treatment of a doctor for her worry. The Press reported that she was determined to hold onto her husband, though she stopped working with him at the antique shop.

She and Dolores continued living in the home on Fairview Avenue, and they kept up with their monthly trek to Vancouver to visit the children. Then, in March 1960, the visits stopped.

When the pair failed to show up in April, Anita Mearns, then 14, called Muldavin and asked about her mother.

“She’s been ill,” her stepfather told her, according to the newspaper.

By May, William Mearns was worried enough to call Seattle police and report his daughter and ex-wife missing. Authorities would learn that Manzie Rockwell failed to show up for work on April 1 and had not been seen alive since.

Dolores Mearns, a student at the University of Washington, had also failed to show up for class that day.

Meanwhile, Muldavin accused his missing wife of desertion, the Press reported. Around the time she and her daughter were reported missing, he sought a divorce on those grounds.

Germain Winkler, who held her new son-in-law in high esteem, soon invested thousands of dollars into Muldavin’s plan to buy a collection of Native American artifacts in British Columbia. 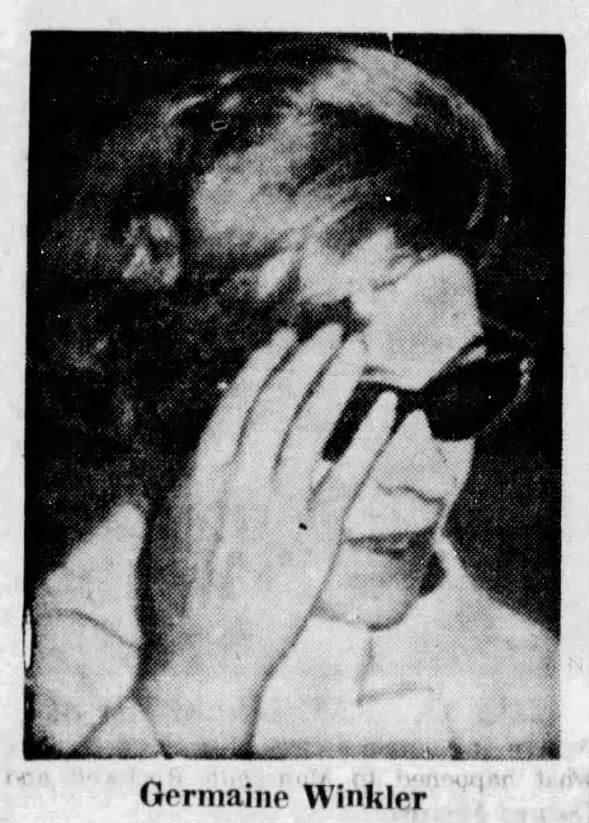 When he failed to return from his supposed buying trip, Winkler and her husband filed grand larceny charges against Muldavin.

It was ultimately Winkler who suggested the detective searching for Manzie Rockwell and Dolores Mearns search the Rockwell home in Seattle.

A national manhunt and Mrs. Rockwell No. 4

In late August 1960, police went to the home, where they found what appeared to be the entire wardrobes of both women still in the house, the Press reported. As detectives continued searching, they found a septic tank underneath the structure.

The tank was sealed with what looked like fresh concrete. When the concrete was broken, investigators found bits of flesh and bone and strands of hair inside. 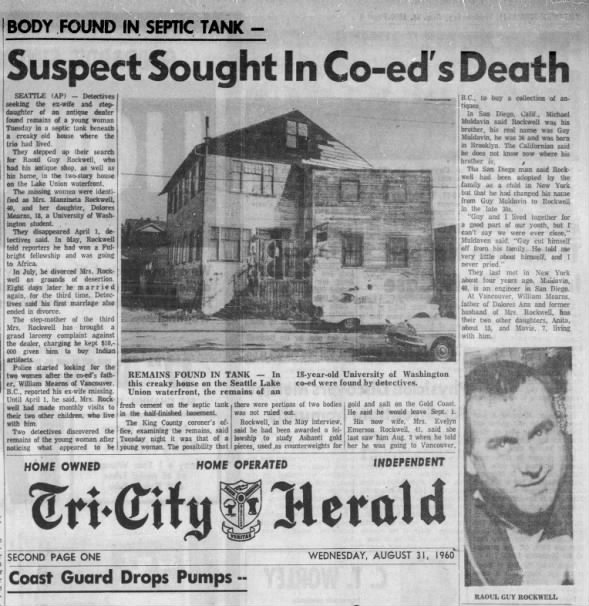 Days later, two legs were found in the Columbia River, about 200 miles from Seattle. Authorities believed that the legs, which belonged to a young adult woman, belonged to Dolores Mearns.

DNA testing had yet to be invented, however, and they had no way of knowing for sure whom the legs or remains in the septic tank belonged to.

As police sought Muldavin for questioning, his new bride defended his name.

“He’s not capable of these things,” Evelyn Rockwell told the Press. “He is the furthest from being a violent man of anyone I have ever known.” 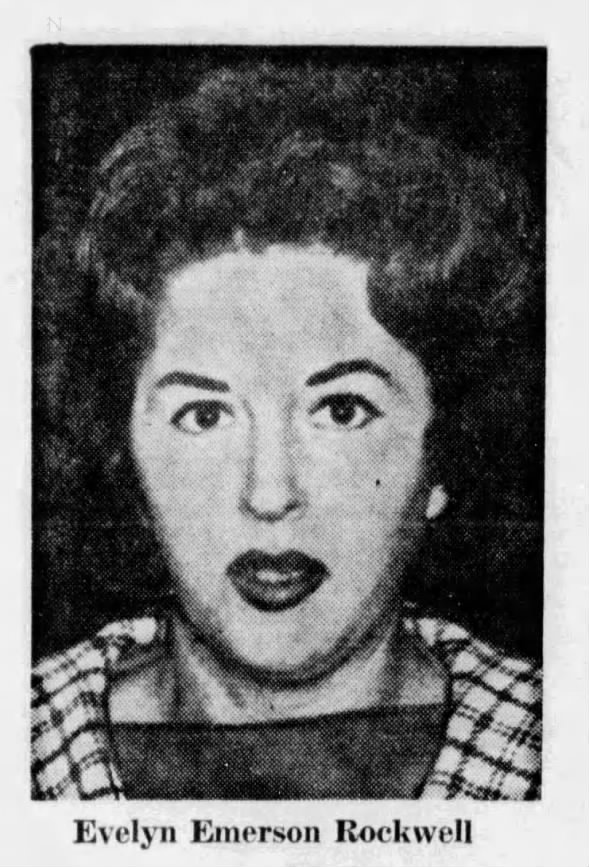 The newspaper reported that weeks before the search of the Rockwell home in Seattle, Muldavin flew to Reno, where he bought a sports car and drove across the country.

Muldavin found himself in Provincetown — where Terry’s body would be found 14 years later. It was not immediately clear if 1960 was the first time he had been to the Cape Cod area.

While in New England, the antique dealer passed himself off as a Vancouver magazine writer.

Over the next few months, Muldavin underwent rhinoplasty in New York, where he signed a three-year lease on a Greenwich Village apartment. 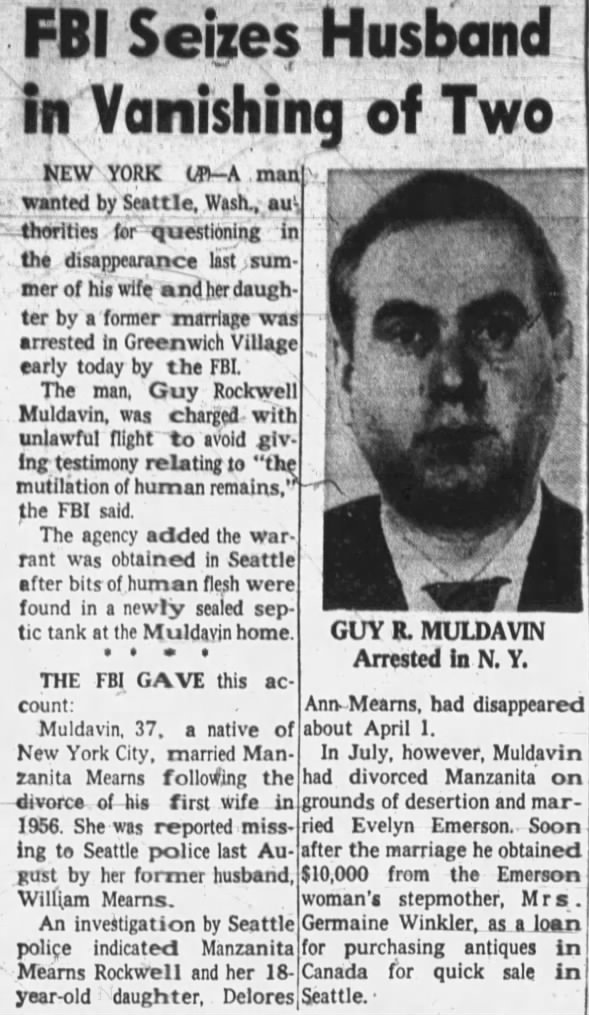 It was there that he was arrested on Dec. 1, 1960, by the FBI, according to The Associated Press. Along with the larceny charge, he was charged with unlawful flight to avoid giving testimony regarding the human remains found at his former home.

Muldavin, whom authorities said wept as he was arrested, denied killing either his wife or his stepdaughter, the Press reported.

King County prosecutors ultimately admitted they did not have enough evidence to support a murder charge, and after sitting in jail for 13 months, Muldavin went on trial on the grand larceny charge alone. 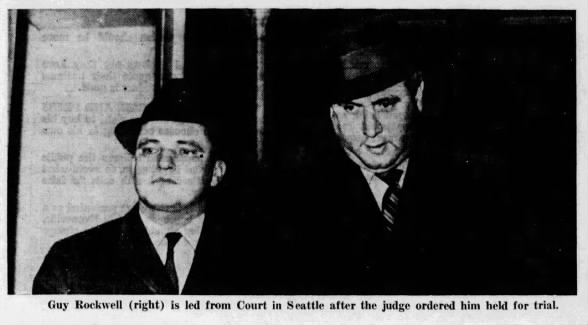 The admitted confidence man was found guilty and sentenced to 15 years in prison, but his sentence was suspended. He was never again charged in connection with the deaths of his wife and stepdaughter.

Little is publicly known about Muldavin’s activities and whereabouts following his trial. Public records pick him up again in Reno, Nevada, on Feb. 16, 1974, when he married Mrs. Rockwell No. 4, a woman named Teri Marie Vizina.

According to FBI and Massachusetts officials, Vizina is one of the aliases of Ruth Marie Terry.

Just five months later, a 13-year-old girl walking her dog on Race Point Beach stumbled upon who she thought was a woman sunbathing nude among the dunes. It was Terry, lying facedown on a beach towel, her Wrangler jeans folded neatly under her head like a pillow.

She had been dead for at least a week.

Cold case detectives are investigating Muldavin’s whereabouts at the time of Terry’s murder.

In 1985, The Californian published a story about Muldavin, then a tobacco store employee, who was the volunteer host of a three-hour weekly call-in radio show for KAZU in Pacific Grove. At the time, he described himself as a retiree who had served as executive vice president of a china, crystal and silver store in Beverly Hills. 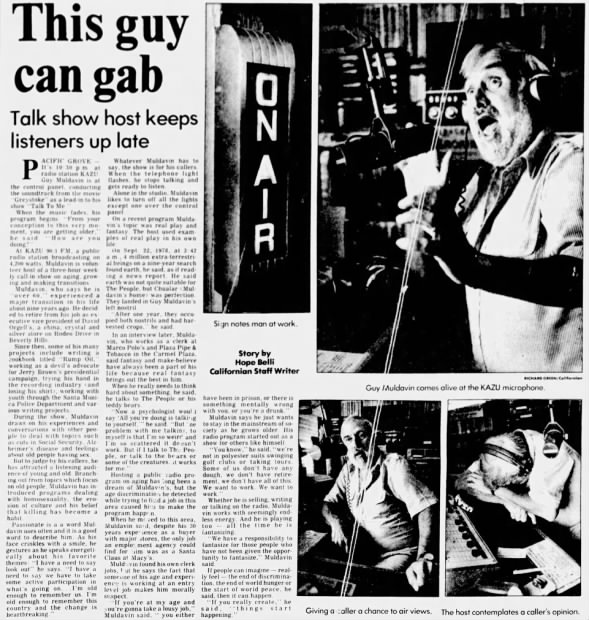 As he did when he visited Provincetown decades earlier, he also described himself as a writer. He had dipped his toes into politics and the recording industry as well, according to Muldavin.

When Muldavin, 78, died on March 14, 2002, in Salinas, his obituary described him as an artist, actor and poet. It also listed him as a former buyer for Bullock’s, a department store chain with locations in California, Arizona and Nevada.