DANBY, Vt. — The last time anyone but his killer saw George Peacock alive, he was cutting his lawn.

Four days later, a concerned neighbor found Peacock, 76, and his wife, Catherine Peacock, 73, dead in their home in Danby, Vermont. The couple had been stabbed to death.

At the time of the crime, Louise was the Peacocks’ son-in-law, police officials said.

Police found no signs of forced entry, which indicated that the couple likely knew their killer. Within two weeks of the murders, Louise became a suspect.

“Investigators at the time developed circumstantial evidence tying Louise to the killings but were unable to establish a conclusive link,” a state police news release said.

That was until forensic testing in May 2020 confirmed that a single drop of blood found in Louise’s car a month after the crime belonged to George Peacock.

“The blood sample had been tested previously during the investigation, as DNA testing technology was emerging, and that earlier test had been inconclusive,” authorities said.

It was unclear why it took more than two years to arrest Louise, but police officials said additional information would be released when Louise is arraigned. As of Friday, Louise remained in the Onondaga County Justice Center awaiting extradition to Vermont.

No alleged motive has been made public.

The Peacocks appeared to live a relatively serene life, according to a 2021 report by ABC22 in Colchester.

“Catherine and George were both retired,” Vermont State Police Detective Sgt. Sam Truex told the news station. “They owned a small gift shop at the end of their driveway. They sold gifts and books as a side business.”

George Peacock also worked three days a week as a desk clerk at the Rutland Lodge, a local hotel. When he failed on Sept. 17, 1989, to show up for his Sunday shift, his co-workers became worried.

“You could virtually set your watch by George,” David Nowick, general manager of the lodge, told reporters in 1989.

Nowick described George Peacock as “one of the most gentle, considerate people” he’d ever met, according to a 1989 story by The Associated Press.

“He was a sweetheart. Everybody loved him,” Nowick said. “He was extremely polite and willing to help anybody whenever he could.” 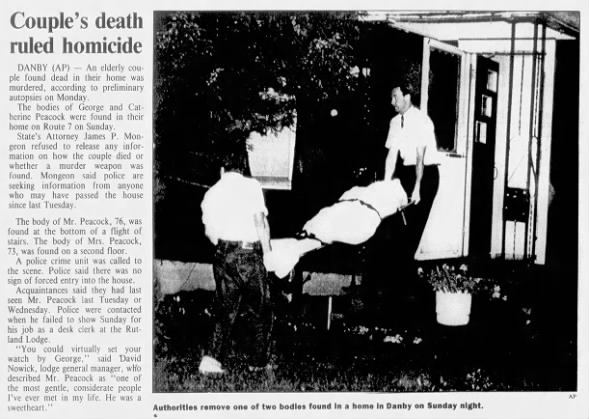 Acquaintances described the Peacocks as a quiet couple with a happy relationship and a strong faith, the AP reported. When George Peacock failed to show up for work and no one had seen the couple in a few days, concern mounted.

Neighbor Jay Kidwell went to the couple’s home and peered inside.

“According to the neighbor, they could see George through the front porch window and immediately thought he was injured,” Truex told ABC22 last year. “The house was found locked, and they utilized the overhead garage door opener from the victim’s car to access the house.”

Kidwell found George Peacock slain at the foot of the stairs. Catherine Peacock’s body was in an upstairs bedroom.

Both victims had been stabbed multiple times with a double-edged knife less than an inch wide, according to their autopsies.

Kidwell speculated days after his neighbors’ murders that the couple might have been the victims of a botched robbery. The AP reported that Kidwell said the house was “neat as a pin,” but George Peacock’s rear pocket was ripped and his wallet was on the floor near his body.

The Bennington Banner reported that family members who looked through the house with investigators said the only other items that appeared to be disturbed were Catherine Peacock’s purse and wallet, as well as a footlocker in the bedroom where the elderly woman was slain.

“It’s just conjecture, but there have been a whole lot of (break-ins) here in the past couple of months,” Kidwell said at the time.

Detectives also considered burglary or robbery as a motive, but acquaintances told police the Peacocks were very security conscious.

Danby Select Board Chair Bradley Bender, who in 1989 leased a building across the highway from the couple’s home, said rumors swirled in the weeks and months after the murders.

“There was a lot of rumor going around at the time that it was a family member,” Bender told the Banner this week. “Word on the street was that they didn’t believe in banks and had a lot of cash on hand, and that someone close to them knew about it.”

According to an arrest affidavit obtained by the newspaper, Louise became a focus of the investigation after witnesses reported seeing a tan vehicle near the Peacocks’ home on or around the day of the homicides.

Louise, who was married to the Peacocks’ eldest daughter, owned a tan 1986 Chevrolet Celebrity at the time of the crime. In October 1989, Penelope “Penny” Louise gave investigators permission to process her husband’s car.

Crime scene technicians found a small drop of blood on the driver’s side floor mat, the Banner reported.

In 1989, DNA technology was too new and rudimentary for authorities to be able to analyze a sample that size. The evidence was stored in a freezer at the Vermont Forensic Laboratory.

In May 2020, Truex, who was the lead investigating officer, requested that several items of evidence in the Peacock double murder be retested. A lab report dated Oct. 15, 2020, showed that the blood belonged to George Peacock.

The affidavit indicates that Louise also found himself on detectives’ radar after they learned of a drive to Vermont he planned the day of the murders. Louise told police he decided against the 197-mile drive, but investigators determined that the time frame of the alleged trip made it possible for him to be at his in-laws’ home around the time they were slain, the Banner reported.

The paper reported that Louise was also known to wear work boots every day and would not buy himself new boots more than once a year. Co-workers at a Hertz rental car office told police, however, that Louise had worn sneakers to work the week after his in-laws were fatally stabbed.