HONOLULU — One of Nevada’s former top prosecutors has been arrested and charged in the brutal 1972 death of a woman stabbed 60 times inside her Honolulu apartment.

Nancy Elaine Anderson, 19, had lived in Hawaii for just two months when she was slain. According to the Honolulu Star-Bulletin, the Michigan native was knifed to death the afternoon of Jan. 7, 1972, as her roommate slept in an adjacent bedroom.

The roommate found Anderson’s body when she awoke from her nap, authorities said at the time.

Chirila, now 77, was arrested Wednesday in Reno. He is being held in the Washoe County Jail on a fugitive warrant out of Hawaii, where he faces a charge of second-degree murder.

Jody Spooner, 18, didn’t realize exactly what she was seeing when she first spotted her roommate’s body on the bedroom floor of Apartment 704 at the Coral Terrace Apartments.

“Spooner noticed that Anderson’s room (door) was slightly ajar, and when she pushed it open, she saw Anderson on the floor covered with blood,” states a criminal complaint against Chirila. “She then ran to a neighbor’s apartment to have them call the police.”

“I think Nancy just killed herself,” Spooner told her neighbor, according to authorities.

Once officers arrived, however, it became clear that Anderson had been slain. 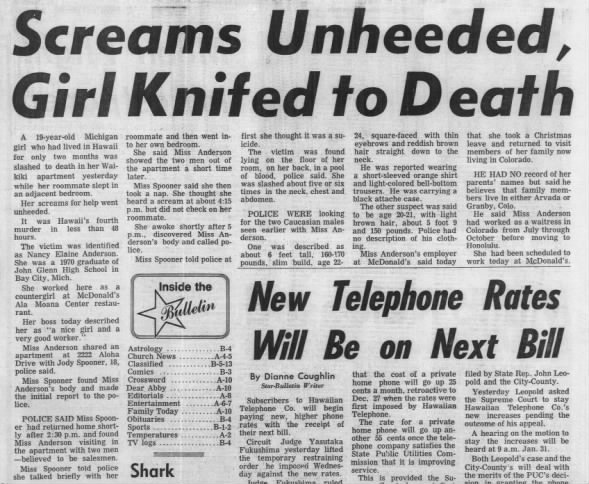 Anderson’s autopsy later showed that she had a total of 63 stab wounds, including three that were exit wounds, to her neck, arms, chest, stomach, back and sides. Her cause of death was a stab wound to her heart.

There were no drugs or alcohol in her system and there was no sign of sexual assault.

Spooner was unable to say exactly when her roommate was slain, though she told police she thought she had heard a scream around 4:15 p.m., about an hour before she found Anderson dead. The Star-Bulletin reported that she did not get up from her nap to check on her friend.

The only lead Spooner was able to give detectives was the presence of two men in the women’s apartment earlier that afternoon. She told police she had returned home less than two hours before the crime to find Anderson chatting with the men, who were knife salesmen.

The salesmen, who immediately fell under suspicion, were soon cleared through fingerprints and polygraph examinations, which both passed, records state. Decades later, DNA testing would confirm that the men were not involved.

Acquaintances, including Spooner, told police Anderson was exceedingly friendly, sometimes striking up conversations with strangers and bringing them home with her. Like the cutlery salesmen, all potential suspects uncovered in the days, months and years after the murder were cleared.

The case was shelved until 2001, when a detective was assigned to reexamine the unsolved homicide. The new detective submitted all latent fingerprints gathered in the case for processing through the Automated Fingerprint Identification System, or AFIS, but there were no matches.

He also requested DNA testing of all blood evidence, including blood found on towels in Anderson’s bedroom, the hallway of the apartment and the stairwell of the fire escape. According to the complaint, an unidentified male genetic profile was found on the towels, indicating that the killer had cut himself while stabbing Anderson.

Anderson’s family, who had been waiting decades for a resolution, offered up several names of possible suspects, including former boyfriends and the manager of her apartment complex. As they had before, investigators were able to cross each name off the list.

Until last fall, when the unidentified tipster gave them Chirila’s name.

Almost immediately, cold case detectives were able to place Chirila in Honolulu when Anderson was slain. Then a 26-year-old graduate assistant at the University of Hawaii, he lived less than 3 miles from her apartment in January 1972.

As the case gained steam, authorities began trying to secretly obtain Chirila’s DNA. Reno detectives, assisting their colleagues in Hawaii, spent weeks watching the elderly suspect but had no opportunity to obtain a sample without his knowledge.

Testing showed he was the biological child of the man who had left his DNA, in the form of the bloody towels, at the scene of Anderson’s murder.

Honolulu detectives subsequently asked their counterparts in Reno to go to Chirila’s apartment and get a DNA sample from Chirila, which they did earlier this month.

Two days after the visit from police, Chirila tried to kill himself but survived, according to court documents.

On Sept. 12, authorities learned that Chirila’s profile matched that of Anderson’s killer.

Nevada records indicate that Chirila, who the Reno Gazette Journal described as a longtime lawyer in the area, has been a member of the state bar since 1978. Over the years, he has worked in private practice and public positions, including as an assistant city attorney in the 1980s.

He was also a deputy attorney general in the late 1970s, shortly after his career began, records show. 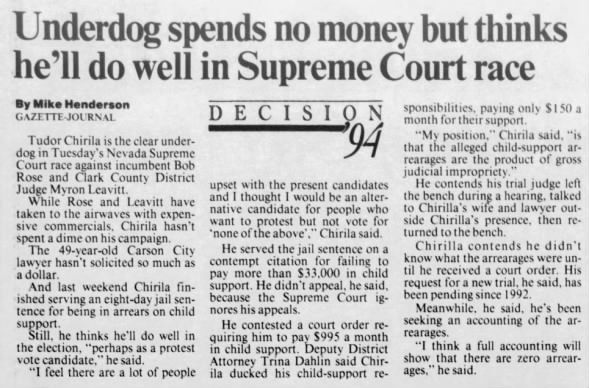 In 1995, a year after Chirila’s unsuccessful court bid, he was accused of kidnapping his girlfriend and beating her in an alleged rape attempt. The Gazette Journal reported that the charges were later dropped.

In the late 1990s, he found himself entangled in the federal prosecution of Joe Conforte, the owner who lost the Mustang Ranch, Nevada’s first licensed brothel, to the IRS due to unpaid taxes. According to The Associated Press, Chirila was the onetime president of A.G.E. Corp., the company Conforte used to illegally buy back the establishment.

Chirila testified against Conforte in 1999, the AP reported. He later sued his former boss for $14 million, claiming Conforte had fired him as retaliation for his cooperation with prosecutors.